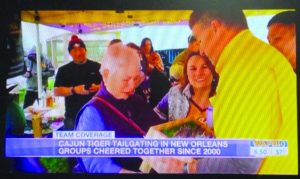 Tiger Stadium in Baton Rouge is getting a new layer of turf and in order to accomplish that, workers had to pull up the old ground cover. Rather than haul it off LSU officials decided to make it available in squares to Tiger fans.
Madelyn O’Donohue is a long-time fan of LSU football and gets together with a tailgating group called Cajun Tiger Tailgaters LLC, whose members have seats close to each other in the stadium and gather before the game to cook and hang-out.
O’Donohue says she’s only missed one home game in 17-years. As she’s become the oldest member of the Cajun Tigers, her fellow members have made her their adoptive mother, and address her as “Mama.”O’Donohue is such a fan of the LSU squad that she remembers attendimg O’Donohue is such a fan of the LSU squad that she remembers attendimg one game at Tiger Stadium that the weather wasn’t cooperative. She said it was pouring down rain with no sign of letting up. The rain was coming in torrents and husband, R.J., encouraged her to go back to their motel with him and forego the game. For Madelyn, there was no question of what she planned to do. Turns out R.J. headed for the motel and shelter, while Madelyn grabbed a raincoat and sat through the entire game.
The morning of Jan. 13, O’Donohue’s daughter, Kelli O’Donohue Inabnet, just happened to catch her mom on WAFB-TV as Jennifer Brouillette Girtman and Darren D’Aubin, manager of the Cajun Tigers, presented Madelyn with the square of LSU turf. D’Aubin acquired four of the turf squares. Inabnet caught the grass presentation, recording it from Channel 9. The above photo was captured from Inabnet’s recording of the television coverage as it was airing.
That evening LSU defeated Clemson for the college football championship.