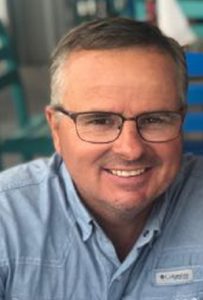 Kenneth Britt Ham
Nov. 28, 1971 – Jan. 28, 2020
Funeral services for Kenneth Britt Ham, 48, were Jan. 31, 2020, at Woodlawn Church, Columbia.
He died Jan. 28, 2020, at M.D. Anderson Cancer Center, Houston, Tex.
Ham spent most of his life at Jayess until moving to Columbia in 2010. He attended New Bethel Church and in his last years became a member of Woodlawn Church. He was the division manager of Birdsong Construction.
He was born Nov. 28, 1971, at Jayess, son of Marlene Ham of Columbia and the late Kenneth Ham.
In addition to his mother, he is survived by his wife, Julee Ham; a daughter and son-in-law, Marla and Steven Bracey; a son and daughter-in-law, Adam and Lindsey Ham; and a daughter, Madelyn Ham, all of Columbia; a sister and brother-in-law, Bridgette and Shay Mann of Dallas, Tex.; a brother and sister-in-law, Darrin and Robin Ham of Jayess; and three granddaughters, Kenna Layne, Adley Rae and Sophie Jane.
Family burial was held Feb. 1, 2020, at Woodlawn Cemetery with Hathorn Funeral Home, Columbia, in charge.
Family and friends may sign an online guestbook at www.hathornfuneralhome.com