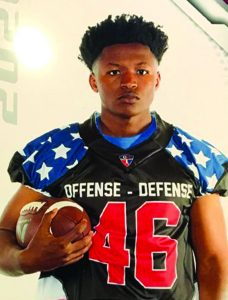 A Tylertown Chiefs’ linebacker and defensive end, Clinton (C.J.) Dillon, has been nominated to participate in the 2020 Offense-Defense All American Bowl, Jan. 2-5, at Miami, Fla. In addition, Dillon has also been nominated to play in the National Championship to be held in Dallas, Tex.
Son of Stacey and Shonderlon Dillon, he is a senior at THS.
Dillon was selected by a committee that based his nomination on his demonstration of drive, skills and talent needed to perform at the next level.
The invitation to the bowl is offered only to individuals that can handle rigorous training and uphold themselves to the Offense-Defense All American Bowl. He was selected for the invitation to participate in the bowl based on his demonstration of drive, skill and talent to compete at the next level.
The invitation is extended only to players that are able to handle rigorous training and uphold themselves to the bowl’s highest sportsmanship policies, but still be able to function as a team member.