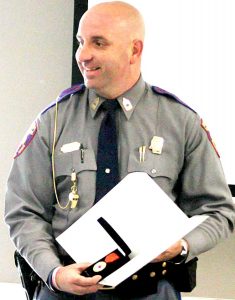 By Kevan Lindsey
(Hattiesburg) Impact
The definition of a hero is defined in Webster’s Dictionary as, “a person who is admired or idealized for courage, outstanding achievements, or noble qualities.”
Master Sgt. David Blackwell, who is a Mississippi Highway Patrolman, was off-duty on a Friday night working as a referee at a West Jones high school game when fellow referee David Bullock collapsed on the field. Blackwell used the skills taught during his participation in the NAUI Public Safety Diving course conducted at The University of Southern Mississippi to save Bullock’s life.
For Bullock and his family, Blackwell’s training to be his hero came at just the right time.
“We have a new dive team that is being taught by Mr. (Bill) Powe (NAUI Scuba Instructor at USM). Ten guys were selected to be on the dive team and he taught us the first-aid, lifeguard, CPR, AED, all those classes. I received the CPR and AED certifications the week of the incident,” said Blackwell.
Wednesday, the American Red Cross Southeast’s Division in Hattiesburg presented Blackwell with their highest honor, the American Red Cross National Lifesaving Award (Certificate of Merit).
“I’m a part-time football official for the Laurel association of MHSAA. In the fourth quarter of the (West Jones-George County) game, I noticed our head official collapse on the field. I raced to his side and my initial assessment was he was not breathing and was starting to change colors, nor could I find a pulse. I started chest compressions. I had a volunteer, I think she was a nurse, come out of the stands to assist me. I asked would she do the respirations for me. I asked the school trainer for an AED and she had one. I was able to rip the shirt off my fellow official and we placed the AED on him and advised the shock. We continued CPR until I was told to stand clear. Eventually, he did regain his color and take a gasp for air. I helped load him into the ambulance and he went to the hospital. To this day he is still getting back on his feet,” said Blackwell as he recalled the incident.
Blackwell said he did not think about how scary the situation was, his only thought was springing into action to help his colleague and friend.
“Not once did I ever think about it. We’ve been taught first-aid through patrol school. Luckily for me, we had the Safety Diving course and were taught AED certification things the same week. Luckily it was fresh on my mind and I didn’t think twice about it.”
The award is not only the highest award given but is also personally signed by the President of the United States. However, Sgt. Blackwell views this heroic event as doing what he needed to do to help someone in need.
“I’m not in it for the awards. I never have been. I think everyone who wears a blue and grey uniform would probably say the same thing. We are not in it for the awards, we are just here to help.”