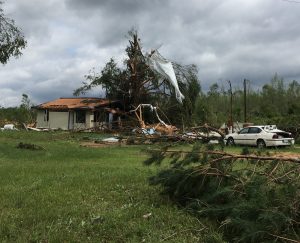 A Walthall County man died in the Easter Sunday tornado that devastated a good portion of the northeast part of the county late Sunday afternoon. Coroner Chris Blackwell identified the dead man as Maxie Lowe III, 44, of Dee Toney Road. Blackwell said he found Lowe’s body in the front yard of this residence. The front of the house was destroyed as evidenced by the debris under the tree.
Blackwell said Lowe apparently suffered a great deal of trauma as the result of the storm. Recovery efforts Sunday were hindered by live power lines on the ground following the tornado. Power crews would not allow workers with skidders, Bobcats and chainsaws into areas to clear debris from roadways until they were certain power lines were shut off.

Concern for COVID-19 took a back seat Easter Sunday as neighbors, first responders, firemen, supervisor crews, utility workers and others pitched in to help residents of northeastern Walthall County recover from a tornado that touched down during the late afternoon, damaging an unknown number of homes and outbuildings and a great deal of timber as it cut its way from Walthall to neighboring Lawrence County and into Jefferson Davis County.
At least one Walthall countian died in the storm, as did a Lawrence County couple who resided just across the county line.
At press time estimates were still being made as to numbers injured. The damage was widespread in an area roughly from Dee Toney Road to East Sartinville Road and into Lawrence County.
Walthall Emergency Operations director Royce McKee was on the scene shortly after the storm hit. Both he and law enforcement officers had difficulty accessing some areas that had been cut off by downed trees and power lines blocking roads.
Both Magnolia Electric and Entergy crews were in the area as both utilities have lines crisscrossing that area of the county. Crews worked through the night and continued working Monday to restore power.
McKee and Sheriff Kyle Breland said they were prevented from accessing areas until utility crews could confirm that no live lines were down. Only then would they allow crews in to begin cleanup of trees covering roads.
McKee was back in the area Monday morning accessing damage. He said he expected to be joined by personnel from Mississippi Emergency Management Agency and was expecting someone from the National Weather Service to estimate the strength of Sunday’s storm.
Already volunteer organizations are offering services. McKee requested such organizations to contact his agency through its
Facebook page in order to begin a listing of what help is available.
Gov. Tate Reeves issued an Executive Order Sunday to ensure help for those suffering damage from the storm.
McKee says those who have suffered damage are asked to report it to him at 601-876-8823. You can also leave a message at the office, 601-827-5116.
“We’re working our way around the damaged areas. Be patient, and be sure to report your damage and address,” he said.
Justice Court Judge Carl Montgomery said New Home Church will have cleaning supplies available to those who need them, and he noted that the church is also acting as a clearing center for those who wish to make donations of clothing, household items, canned foods and staples to victims.
Sartinville United Methodist Church is acting as a feeding site, at least until Wednesday, for lunch and supper for workers, clean-up crews and storm victims. A volunteer group from Gulfport is coordinating the effort with help from area restaurants and food service facilities. (If you are concerned about COVID-19 you may want to wear masks and gloves.)
Some weather officials estimated the storm cell packed winds of up to 200 mph.
The damage estimates are ongoing and it may take up to a week to complete them, especially when considering other areas in the state that were affected by the storms.
(See more on Pages 2 and 3)