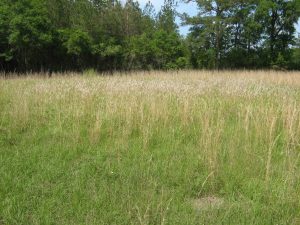 Spring is wonderful time of the year, but it also brings with it the emergence of Cogongrass. It is easily identifiable at this time of the year, as it has a golden brown/tan color. Once it emerges from dormancy, it will be green, then it puts out a fluffy, white seedhead that can be seen shining in the sun. Classified as the seventh worst weed in the world, cogongrass is hardy and tolerant of shade, high salinity, and drought. It forms dense mats that crowd out native vegetation and forage plants and displaces ground-nesting species, such as turkey and bobwhite quail. It can alter the natural fire regime by causing hotter and more frequent fires. Cogongrass is still sold by some nurseries under the name Japanese blood grass.
Cogongrass is a highly invasive grass that will seriously degrade wildlife habitat and native plant communities. Native to Southeast Asia, cogongrass arrived accidentally as packing material into Mobile Bay, Alabama, in the early 1900’s. It was later promoted as a forage grass and as an ornamental. Cogongrass has no forage value to livestock or wildlife and is spread by wind-blown seeds and rhizomes that are transported by mowing, logging or farming equipment that has come into contact with seeds or the plant. This grass was also spread as an ornamental and forage plant in some states until federal and state regulations listed it as a noxious weed, restricting its intentional planting. Because this grass can degrade property values, limit land use alternatives, and damage forest resources and wildlife habitat, landowners should learn to recognize it and take immediate actions to control it.
Treat cogongrass now with a 2.6 oz. per gallon of water (2.0% solution) of glyphosate (e.g. Roundup) during the spring for suppression, and imazapyr (e.g., Arsenal) at the rate of 24 oz. per acre, or 1oz. per gallon of water, during late summer or early fall. Although imazapyr will kill desirable hardwood trees, shrubs and pasture, it may be worth sacrificing desirable plants in order to control the spread of cogongrass. The sooner this invasive pest is treated, the more effective control efforts will be. After initial herbicide treatments, treated cogongrass stands should be carefully monitored, as further herbicide treatments will likely be necessary for effective control. If you suspect you have cogongrass on your property, contact the Walthall County Extension Office at 601-876-4021 or a natural resource professional to verify it and assist you with developing a cogongrass eradication plan.