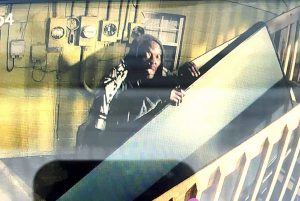 That look of bewilderment is real as suspect realizes he’s been caught on video in the act of removing a television from a residence.

A suspect in a larceny investigation returned the television he’s shown carrying up a flight of stairs last Tuesday after he realized he’d been caught in the act on a surveillance video.
Tylertown Police posted a still taken from the video on their Facebook page shortly after the missing television was discovered by its owner, Eric Steel, asking the public’s help in identifying the perpetrator. From the stunned look on the suspect’s face, it is obvious he realized he had been caught in the act
By posting the image on Facebook, the middle age black male apparently realized it would only be a matter of time before his identity was made public.
Police Chief Brandon Bright, in recent months, has been complimentary of both businesses and homeowners who see fit to install high quality cameras and recording equipment.
“Today’s video gear is inexpensive, can be used in conjunction with your computer and cellular telephone. The big plus is that it delivers a high-quality image that can be used as evidence in court,” Bright said. “As they say, a picture is worth a thousand words.”
This is the second time in recent weeks that video has helped police solve a break-in in a short time. A few weeks ago, another suspect was apprehended after he entered the law offices of Mord & Stewart, concealing himself in the suspended ceiling above the reception area. While he gave himself away by moving around in the ceiling, the law office video and video from neighboring businesses left little doubt to his being the person who broke into the office.
The police department said they’ve identified the suspect as of last Thursday, but would not release his name as he had not been arrested and charged at the time. Meantime, police were continuing their investigation of the TV theft, even though the flatscreen television has been returned to Steel, the owner.