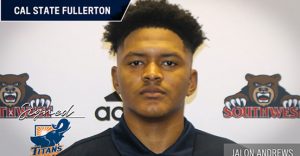 Southwest Bears forward/center Jalon Andrews has signed a scholarship to continue his collegiate career with head coach Dedrique Taylor’s Cal State Fullerton Titans.
Cal State Fullerton is an NCAA Division I institution located in Fullerton, Calif. The Titans play in the Big West Conference.
Andrews (6′ 8″, 225) is a graduate of South Pike High School. In his final season with the Bears, he averaged 7.7 points, 7 rebounds and 1.9 blocks per game. He had 6 double-doubles during the season and recorded a season-high 19 points and 14 rebounds in a 76-70 win at Meridian.
Of his time at Southwest, Andrews said he liked “how the coaches ran the program like we were already in at the Division I level.” He also said the “most important things I’ll take away from my two years at SMCC are time management and accountability.”Bears head coach Bryan Bender said that Andrews “was a model student-athlete and I am so proud of the way he continued to progress within our program. He did everything right on and off the floor and was a perfect example of a local kid turned DI prospect.”
“His leadership on the floor, in the classroom and in our community is exactly what you want to see in a player within our program,” Bender continued. “The coaching staff at Fullerton will do a great job of keeping him on task and making him a better person and player.”
His primary reason for signing with the Titans, Andrews said, was “because of how they develop players from one year to the next and help them accomplish goals they set in preseason.”
Andrews plans to major in sociology and said he would like to play professionally after he completes his time at Fullerton and then move into coaching.