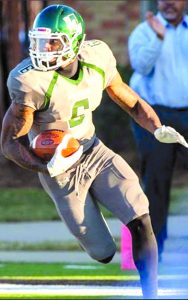 Former Salem High School Wildcat, Junior Faulk, cornerback at Delta State University, is one of 440 small school prospects from National Assn. of Intercollegiate Athletics schools listed by NFL Draft Diamonds as deserving a look from NFL teams. Faulk was chosen based on films from last season viewed by the NFL Draft Diamonds website.
A versatile player, he’s adept at many positions, cornerback, defense back, safety and wide receiver.
Faulk told Draft Diamonds writer Jimmy Williams he considers Southwest Community College coach Peavy as pivotal in the development of his career. As a freshman, Faulk said the coach brought out his work ethic and basically “made me a man.”
Delta State picked up the 6-1, 200-pound Faulk from SMCC. Last season Faulk picked off nine interceptions and 22 pass deflections.
A top pick out of Division II he’s hopeful of getting picked up in the draft.
In an earlier article, his mom, Lakenya Smith of Jayess, said he was misidentified as a THS graduate. The stat sheet used by The Times, however, did identify him as playing prep ball at Tylertown rather than Salem, as he should have been.