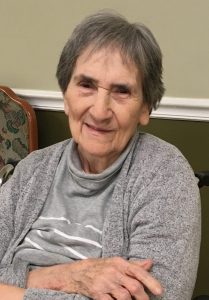 Dorothy Thornton
Feb. 9, 1932 – July 13, 2020
Dorothy Brumfield Thornton, 88, died July 13, 2020, at Diversicare Nursing Home in Tylertown. She was born Feb. 9, 1932, the daughter of the late Willis and Olles Blackwell Brumfield.
After she graduated from high school, she attended Business College in Jackson. There she met and married her husband, the late Wade Thornton. They moved to Merritt Island, FL, where they worked until they retired. She was a secretary for a government agency.
She and her husband returned to Tylertown in the early 1970s. She served at Knoxo Baptist Church as church historian, media consultant, and head of the seniors class. Dorothy provided shelter for a number of dogs and cats and in her later years, she had three special cats that she adored.
In addition to her parents, and her husband, Mrs. Thornton was also preceded in death by a sister, Maudean (Dean) Holmes; two brothers, Basil Brumfield and Charles Brumfield, and a nephew, Charles Willis Brumfield.
Mrs. Thornton is survived by nephews, Vic and Richard Holmes; nieces, Gwen (Michael) Langhart, Dr. Cindy (John) Hester; Penny Brumfield; Pam Brumfield Case; and Jo Holmes. five great nephews; four great-nieces; and three great-great nephews.
A private family graveside was held at the Brumfield’s plot in the Tylertown Cemetery.
Hartman-Hughes Funeral Home was in charge of the arrangements. Relatives and friends may sign the online book at www.hartmanhughesfuneralhome.com..