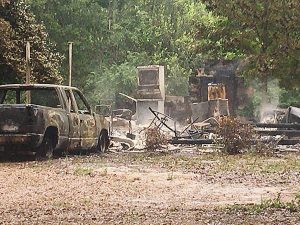 Two people died in an early morning house fire of undetermined origin Saturday morning. Firemen responded to the alarm about 6 a.m. at 87 Johnson-Smith Road. County fire coordinator, Jimmy Boyd, said the structure was on the ground when units arrived. Firefighters uncovered the remains of the two victims in the rubble. Coroner Chris Blackwell said Monday morning that positive identification of the victims is still pending and has not been made public. Firemen said the bodies were burned beyond recognition. County fire investigator Brad Dunaway and the state fire marshal’s office were examining the ruins to determine a cause of the blaze.