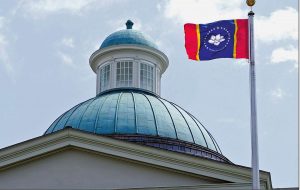 The Magnolia Flag flies at the Old Capitol at Jackson. The design was approved by the Mississippi Flag Commission from almost 3000 designs submitted. It will be submitted to voters for their approval on Nov. 3. If state voters reject the new design, the search process for a new Mississippi flag will start all over.

The commission charged with choosing a new design for the Mississippi state flag decided last Wednesday to recommend a banner showcasing the state flower, the magnolia. The “Magnolia Flag” survived the commission’s vote after it narrowed the selection down to two proposed flags.
The other design featured a shield appropriated from an emblem used prior to statehood when the region was named the Mississippi Territory. It had been modified with wavy lines, representing water, associated with the Mississippi River and the Gulf of Mexico. It had gained the nickname, the “Great River Flag.”
Legislators bowed to pressure, brought on in part by a new national examination of racial injustice and calls from religious bodies, including the Mississippi Baptist Convention, sports groups, including the Southeastern Conference, along with business and educational leaders.
While state lawmakers took a lot of criticism for lowering the old flag, proponents of a new design have said there is too much baggage associated with the stars and bars, not only its ties to slavery in the old south, but its usage, beginning after the Civil War by the Ku Klux Klan, then later adopted by a number of white supremist groups, “skinheads” and extremists tainted the way many viewed the flag. The Confederate battle flag was even adopted for use as a standard by the American Nazi Party and frequently displayed with the Nazi flag of World War II Germany at the group’s rallies.
In a state that has struggled with racial issues since entering the Union, the old flag was seen more and more as a divisive and controversial emblem rather than a flag representative of all the state. At least 38% of Mississippi’s population is Black.
Almost 3000 designs were submitted by the public, illustrating the interest generated by choosing a new banner.
An Ackerman graphic designer, Rocky Vaughan, created the overall design of the Magnolia Flag, containing work from others. The final submission is a combination of ideas from six people, four from Mississippi, one from San Francisco and one from Massachusetts.
Vaughn said he began working out designs years ago when Mississippians were engaged in a controversy over the state flag, eventually put to state voters, who decided to retain the old design.
The commission narrowed their choices down to five, and then to two before making its final decision Wednesday.