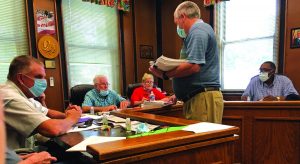 For the first time in 42 years Walthall countians will be able to vote on two alcohol referendums in conjunction with the Nov. 3 general election.
The Times is carrying legal notices this week pertaining to two upcoming elections dealing with legal sale of alcoholic beverages in the county after the county board of supervisors accepted petitions from the required number of qualified electors, and voted to place both questions on the general election ballot in November. Both notices will run four weeks as official notification to voters that the election will be held.
The two local option elections are handled as two separate issues in Mississippi, and appear as such on the ballot.
Voters will be asked to vote either for or against the question of whether the sale, distribution and possession of alcoholic liquors shall be permitted in Walthall County.
Voters are also being asked to vote either for or against the question of whether the transportation, storage, sale, distribution, receipt and/or manufacture of wine or beer shall be permitted.
The number of counties where either beer or liquor or both are available (in some cases the county may be dry but a municipality or municipalities within those counties are wet) has been on the upswing over the years. Walthall is one of just a handful where alcoholic beverages cannot be legally purchased anywhere in its limits. It is surrounded on all sides by counties where liquor and/or beer is available, and alcohol is also available in neighboring Washington Parish, La., to the south.
Sale proponents have pointed to the loss of sales tax dollars, not only in alcohol sales, but sales of groceries, gasoline, tobacco products and other retail trade as residents cross county lines to make alcohol purchases, which almost always results in their purchasing other goods and services out of town, as well.
Countians are voting for the local option issues under the current Mississippi law governing liquor and beer and light wine. Under that law Mississippi is recognized as technically a “dry” state. The state has always been known as a temperance state. Alcohol had been illegal in the state since 1907. While beer sales have been allowed by local option since the repeal of prohibition in 1933, the state never ratified the 21st amendment ending U.S. prohibition, which lasted from Jan. 17, 1920 to Dec. 5, 1933.
In 1966 Mississippi became the last state in the U.S. when the legislature okayed legal liquor sales by allowing local government entities–counties and/or cities–to vote to “come out from under the state’s dry law.”
That is the law countians will vote under come Nov. 3, and it remains in effect until Jan. 1, 2021. At that time, under legislation passed by the state House and Senate and signed by Gov. Tate Reeves this year, Mississippi officially becomes a “wet” state. State residents will still have to carry out local option elections in order to sell alcohol, however, possession, consumption and transportation of alcohol–beer or liquor–will no longer be prohibited in counties that are “dry” for alcohol sales.
Legal alcohol sale backers presented the board of supervisors with two petitions Tuesday, both certified by the circuit clerk’s office as having met the required number of signatures of registered county voters, asking for the issues to be placed on the ballot. By accepting the petitions Sept. 8, the two issues hit the 60-day window to be turned in prior to election day.
Earlier, a liquor petition was turned in to the board, but petitioners asked to withdraw it, and the board rescinded accepting it, when they found they were outside the 60-day limit.
Meantime, the drive continued to collect the required signatures for the beer and light wine petition.
The two petitions require different numbers for placement on the ballot. According to state statute, for liquor to be placed on the ballot for a vote, a petition containing the names of 1500 qualified electors or 20% of registered voters, whichever is lower, is required.
For the vote on beer and light wine, the law requires a petition with signatures of 20% of electors. That number changes frequently as people register to vote, move, die or otherwise are added to or removed from the roles. Circuit Clerk Vernon Alford estimated early on that the required signatures needed were at least 2016, based on the day he reviewed the roles.
In both cases, more than enough signatures were turned in and after over 1550 liquor signatures were verified, allowing for an adequate margin, the clerk’s office accepted the liquor petition.
As workers continued to gather signatures for the beer and light wine petition, once enough were verified for liquor, they went ahead with the signup until the week prior to turning in the petitions Tuesday. Well over 3000 names were turned in with the beer and light wine petition and deputy clerks stopped counting after over 2100 signatures were verified.