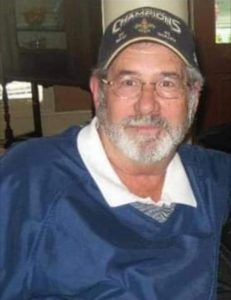 Johnny Mangum
March 20, 1945 – Oct. 23, 2020
John Hiram “Johnny” Mangum, 75, died Oct. 23, 2020.
He was born on March 20, 1945, in Tylertown, to Phala and Paul Mangum.
Johnny graduated from Tylertown High School, where he participated in all sports and earned a football scholarship to Southwest Junior College in Summit. He then attended Mississippi College and attained his pharmacy degree from Samford University in Birmingham, AL.
Johnny began his pharmacy career at Patterson Drugs in Jackson. He worked for a brief time in Kentucky before returning to Tylertown, where he was the owner of Tylertown Drug Store. In 1980, he moved to Clinton, where he met his current wife Sandra “Punk” Mangum. He worked for several pharmacies, including Polk’s Discount Drugs. He was known for treating his customers like family. He retired as the pharmacist for the Mississippi Department of Corrections.
Johnny and Sandra’s home has always been a place where friends and family gather, and he made everyone feel welcome. You knew you had become part of the family when Johnny bestowed a nickname upon you, and it stuck. Many of his sons’ friends felt as if he were their second Dad. When you left the Mangum house, Johnny would always make sure to tell you “Remember who you are and where you came from.”
Johnny is survived by his wife, Sandra Mangum, his sons Chandler Mangum (Mary Katherine), Jayson Moak, Joel Moak, and Craig Mangum (Michelle); grandchildren Tyler Mangum, Griffin Mangum, Austin Moak, Prestin Moak and Magnolia Mangum; siblings Max Mangum (Claire), Renee Mangum McGinnis (Briggs), and Kevin Mangum (Susie).
He was preceded in death by his parents and daughter-in-law, Heather Rogers Moak. In lieu of a memorial service, a private gathering will be held for family on a later date.