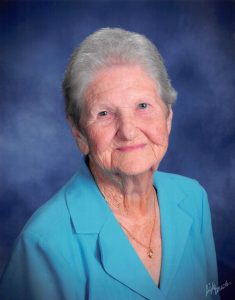 Justine Toney
Sept. 3, 1926 – Oct. 21, 2020
Funeral services for Justine Torrence Toney, 94, of Biloxi, were Oct. 25, 2020, at Capps Funeral Home in the chapel with Rev. Mark Wicker officiating.
Mrs. Toney died at The Pillars in Biloxi Oct. 21, 2020. She was born Sept. 3, 1926, in Ludlow to the late Maude and Richard Torrence. She was also preceded in death by her husband Dan Toney; daughter Patricia Williamson; grandson Lance Toney; sisters Julia Smith and Flossie Prestage; and brothers C.H. Torrence, Johnny Torrence, and J.W. Torrence.
Mrs. Toney had worked at Haspels. She also worked for the telephone company and was a den mother at Southwest Community College. She enjoyed working in the yard; even at the age of 89 she would have her ax or chainsaw in hand making sure the limbs were trimmed. Her other hobbies included cooking, reading, making quilts for the family, all of the grandchildren had a quilt especially made for them. She was also a longtime member of Salem Baptist Church.
Survivors include her sons Larry (Sherry) Toney and Randy (Kim) Toney; daughters Dinah (David) Merit and Barbara (Bill) Graham; sister Geneil Richardson; brother Donald Torrence; 11 grandchildren; 16 great grandchildren; eight great-great grandchidren.
Pallbearers were Ricky Williamson, Stephen Williamson, Dustin Merit, Toney Williamson, Andy Williamson, and Jake Rodgers.
Capps Funeral Home was in charge of the arrangements. Family and friends may sign an online guestbook at www.hartmanhughesfuneralhome.com