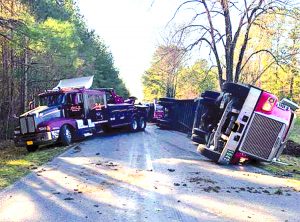 A Jeff’s Towing wrecker, left, is on scene to upright an 18-wheel chip truck last Tuesday, Feb. 2. The Mississippi highway Patrol said the crash occured around 2:15 p.m., involving a 2014 Freightliner. MHP spokesman Craig James said the Freightliner dropped off the shoulder of the road and, as the driver attempted to get the tractor/trailer rig under control, it tipped over, overturning and spilling a load of wood chips on the highway’s west bound lane. James said a 2006 westbound Pontiac Grand Prix ran off the right shoulder of the road into a ditch in order to avoid a collision with the 18-wheeler. The driver of the car was uninjured. The driver of the tractor-trailer rig, Edward Larkin, 67, of Ponchatoula, La., sustained serious injuries. He was transported to Forrest General Hospital. A westbound 2006 Pontiac Grand Prix was approaching the rig when it overturned. The driver of the Pontiac took to the right shoulder of the road and a ditch to avoid colliding with the overturned tractor-trailer. The driver of the Pontiac was uninjured. The roadway was shut down for about four hours in order for crews to clean up the accident scene.
Posted in News