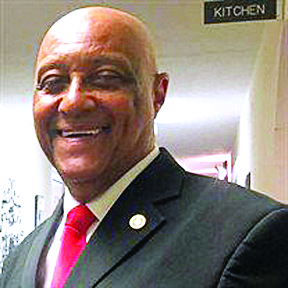 Luzerne “Sonny” Dillon
Dec. 6, 1948 – March 8, 2021
The man who broke racial barriers in Tylertown’s city government in the early 1970s and did the same in civic clubs, died at age 72 at Forrest General Hospital from complications of Covid-19.
Luzern “Sonny” Dillon, a licensed mortician, funeral director and well-known and respected funeral home operator in Southwest Mississippi died March 8, 2021. A memorial service will be held at a later date.
A public viewing was set for March 16, 2021, from 9 a.m.-1 p.m. at First Baptist Church, McComb, continuing at Tylertown’s City Hall from 3-5 p.m.
A native of Tylertown, he was born Dec. 6, 1948. As a child and during his high school years, Dillon worked at Washington Funeral Home. After graduation from J.J. Gulledge High School, he attended Kentucky School of Mortuary Science, Louisville, Ky.
Dillon worked a total of 37 years at Washington Funeral Home. In 1984 he and his wife, Georgia, moved to McComb. In 1993 Dillon joined Craft Funeral Home as manager, purchasing it in 1998. The Dillons purchased Ginn Funeral Home in Tylertown from the Ginn family in 2013, renaming it Craft-Ginn Funeral Chapel.
Mayor Edward Hughes served as a Tylertown alderman when Dillon was first elected to the town board.
“When he was elected alderman, he had both Black and white support. He was very well known in the city and respected for his work ethic. Sonny was one of the main reasons racial relations in town are as good as they are. He was an outgoing, thoughtful person who did a lot for Tylertown when he served on the board. Even after he moved to McComb he stayed interested in his hometown, driving over several times a week.,” Hughes said. “He really paved the way for all Black elected officials who followed him in both the town and county.”
As one of the state’s first two Black elected officials south of Jackson, Dillon’s election to the board of aldermen attracted media attention of the major television networks and larger newspapers including the Chicago Sun-Times.
Dillon served on the state funeral service board for eight years, first appointed by Gov. Bill Allain and again by Gov. Ray Mabus. He worked as an inspector for the board. Dillon was the recipient of the Osborne Bell Award of the Mississippi Funeral Directors and Morticians Assn. in 2018.
He served as president of the Walthall County chapter of the NAACP, coordinator of the Walthall County Coalition, member of the Walthall County Economic Development Authority and was the county’s first Black notary public.
Dillon organized the first protest march in Tylertown alongside Dr. Martin Luther King’s daughter. He was instrumental in renaming Lundy Street to Dr. Martin Luther King Drive and led the first King March and Celebration from Hwy. 98 to Tylertown First Baptist Church.
Dillon actively participated in the Dr. Martin Luther King parade in Tylertown for over 20 years. He was an integral part in establishing Southwest Health Agency for Rural People and was one of its founding members. He was a member of the McComb Rotary Club and was named a multiple Paul Harris Fellow. He was a member of the Pike County Minority Business League, as well as a life member of the NAACP and served as president of the local chapter for 12 years.
Dillon attended Walker’s Chapel Free Will Baptist Church, where he was chairman of the trustee board. He was the oldest trustee serving on the church board at the time of his death. He had been instrumental in helping the church purchase surrounding properties.
In 2005 Dillon summed up his business philosophy when interviewed for an Enterprise Journal article: “Be accountable, be dependable, be stable, and be able to work with the public. In my business, the public and the people I serve are my boss.”
Dillon is survived by his wife, Georgia Dillon; four daughters, Crystal (Tony) Hollis of Allen, Tex., Sebrina (Walter) Banks of Orlando, Fla., Lillian Dillon of Washington, D.C. and Carmen (Javonnie) Lenoir of Tylertown; eight grandchildren; a special niece, Tammy Hughes; and a devoted great nephew, Nicholas Mallard. He was preceded in death by one son, Lomaeine “Dickie” Dillon.
The family requests memorial contributions be made the Boys & Girls Club of Southwest Mississippi, McComb and Tylertown (www.bgcswms.com); Southwest Mississippi Children’s Advocacy Center (www.swmscac.org); or The Rotary Foundation (www.rotary.org).