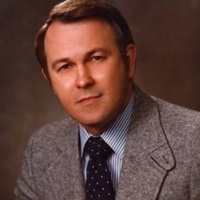 John H. Lee, Jr.
May 26, 1933 – June 7, 2021
John Houston Lee, Jr., 88, a resident of McComb, longtime resident of Magnolia, died June 7, 2021 at The Claiborne in McComb, Dr. Barry Ward officiating, burial in the Magnolia Cemetery.
Lee was born May 26, 1933, in Tylertown to John Houston Lee, Sr. and Agnes Mae Thornhill Lee. He played football for Tylertown High School where he graduated in 1952 and went on to attend Southwest Junior College.
He retired from MacMillan-Bloedel where he worked for 42 years. He was a member of First Baptist Church Magnolia, where he was a deacon, served on many committees, taught Royal Ambassadors, and served in the prison ministry. For many years, Lee taught a young married couples’ Sunday School class. He was bestowed the honor of Deacon Emeritus in 2016. Even during his time as a resident at The Claiborne of McComb, he continued witnessing to those he met. John loved working with wood and also spent many hours fixing up a 1948 Ford Coupe. He had many hobbies, but was extremely fond of shooting pool, bird hunting, and FaceTiming his grandchildren and great grandchildren.
He is preceded in death by his parents, and his wife of 68 years, Nancye McDavid Lee; along with a brother, Oliver “June” Whittington; a half brother, Ray Gordon Lee; and twin great-granddaughters, Kristilee and Karollee McDaniel.
He is survived by his daughters and sons-in-law, Debbie Lee Walker and Mike of Magnolia, Brenda Lee Newman and Myrle of Smithdale, and Mary Lynn McDaniel and Brian of Magnolia; grandchildren, John Michael Walker (Courtney), Katie Aslakson (Eric), Josh Newman (Britni), Jake Newman (Chastity), Justin McDaniel (Karinlee), Jenna Karl (Richie); and 16 great-grandchildren, Sarah Beth, Ian, and Luke Walker, Tony and C.J. Andren, Alyssa Aslakson, Bowen and Brooks Newman, Carson and Taylor Ellis, Hadley Newman, Mckenlee, Memphis, and Max Karl, Kathrynlee and Jackson McDaniel; a sister, Betty Whittington Breeland.
Pallbearers were John Michael Walker, Josh Newman, Jake Newman, Justin McDaniel, Jenna Karl and Katie Aslakson.
Honorary pallbearer was Sammy Lang.
Hartman Jones Funeral Home in McComb was in charge of the arrangements.