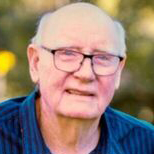 Paul Rushing
June 15, 1942 – June 21, 2021
Paul Edward Rushing was born June 15, 1942, in Walthall County to the late Robert William Rushing and Willie Mae Dillon Rushing. He died June 21, 2021, He was married to his high school sweetheart Lynda for 60 years. Rushing retired from Delta Airlines after 30 years of service.
He was an athlete all his life, playing basketball, baseball, and football during his youth. He excelled at basketball and was the leading scorer and co-captain of Southwest Junior College 1963 State Championship Team. While at SMJC, 1961-1963, he scored 1,107 points, long before there were 3-point plays. Following his time at SMJC he graduated from Mississippi College with a degree in physical education. While at Mississippi College, he was 2nd in the nation in free throw percentages for small colleges. Paul was inducted into the SMJC Hall of Fame in 2010 and the Mississippi Community and Junior College Hall of Fame in 2018.
In his later years, golf was his sport of choice and he looked forward to his “T-time”.
Survivors are his daughters, Tammie (Kevin) Aucoin and Melaine (Jim) Porter; grandchildren Adam (Erinn) Aucoin, Nicole (Chad) Trahan, and Brandt (Kelsey) Porter; great grandchildren Cameron, Addison, Madelyn, Mason, Marlee and Blake; siblings, Dot Teston “Sister”, Wilmon (Gail) Rushing, Rev. John (Margaret) Rushing, and Carrie (Duewayne) Tullos.
He is preceded in death by his wife Lynda Ard Rushing and his parents Robert William Rushing and Willie Mae Dillon Rushing.
At Rushing’s and family’s request, please no flowers or plants. Instead, if you feel lead to give, donate to your favorite charity or Hospice of Acadiana, 2600 Johnston St. Lafayette, LA 70503. Spend a special day with a grandchild or family or treat someone to a round of golf in his memory.
A private service was held at Henderson Bible Church. Louisiana Funeral Services & Crematory of Broussard, LA, was in charge of the arrangements.