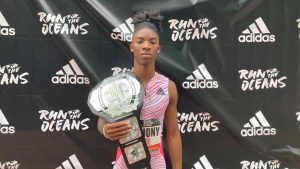 By Christopher Webber
MileSplit MS
At this point, I don’t even know why I keep getting surprised.
In the last month, there have been five state records go down. FIVE in the last MONTH!
And much like how I ended yesterday’s article with the hashtag “Put Mississippi on the Map”… that’s exactly what Tylertown High School’s Jordan Anthony did.
At the NSAF Outdoor National Championships held in Eugene, OR, Anthony went on to win the 100m dash in a Blazing, Wind-Legal 10.21!! This time breaks his previous record of 10.30, and also breaks the all-conditions record of 10.23. Anthony is now your official record holder in the 100m dash, as no one has ever covered 100 meters faster in Mississippi High School History.
But Anthony wasn’t done yet, as he was slated to show off his talents in the 200m dash as well. In the prelims of the 200m, Anthony qualified for the final. Normally, that wouldn’t be any kind of crazy news… except that Anthony ran a wind-legal 20.86 to do so, which is another state record for the Tylertown superstar.
And even though it may seem as if there couldn’t possibly be anything else to add to Anthony’s outstanding weekend, there is still more. Because in the final in the 200m, Anthony placed 2nd in the nation, running an all-conditions state record of 20.57. The wind was at 2.1, just outside of the time being considered wind-legal, but Anthony now holds both wind-legal and all-conditions, so there is no doubt on who the fastest sprinter in state history truly is.
In one weekend, Anthony took the 100m and 200m state records, placing 1st and 2nd in the nation doing so. This has been an overall historic track season for Mississippi, as we have seen numerous state records go down, as well as multiple All-American and national caliber performances. If there is anything that Mississippi athletes have shown us this year, it is that any time they are put on the stage, no matter how big it is, they will always deliver.