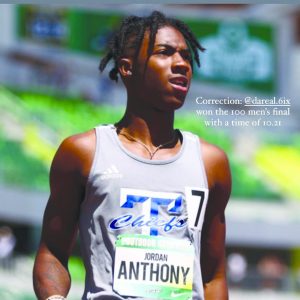 In addition to state, national and world rankings, Tylertown High School trackster Jordan Anthony has been named the Mississippi Gatorade Player of the Year for Track and Field.
Anthony most recently competed at the 2021 NSAF Outdoor Track and Field Nationals at Eugene, Oreg.
Anthony was accompanied by his coach, Myreon Sartin, who recapped the times from the events:
The THS runner won the national championship in the 100 meter dash with a time of 10.21, which also lowered the timing of his state record and ranks him as No. 2 in the country for 2021 and No. 2 in the world for athletes under 18 years old. The 10:21 time is the No. 7 best time for all-time in the world for athletes under 18.
Later in the day, Sartin said Anthony picked up the national runner-up title in the 200 meter event with a 20.57 wind-aided time to place second overall.
And Anthony’s 200 meter wind legal time of 20.86 in the preliminary race also broke the Mississippi state record as well as placing him at No. 3 in the world for athletes under 18.
Coach Sartin also points out that Anthony’s 100 meter time is only .16 seconds shy of the Olympic standard.