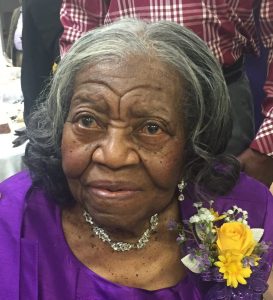 Ollye James
Aug. 22, 1928 – Aug. 8, 2021
Ollye V. H. James, 92, of Tylertown, died Aug. 8, 2021, at her residence in Tylertown.
Born Aug. 22, 1928, in Walthall County, she was the daughter of the late Curtis and Adoll Magee Hammond.
She married Jesse E.M. James, whom she met at Alcorn State University. He was a graduate with a bachelor of science degree in agriculture education. She earned a bachelor of science in elementary education with a minor in library science from Alcorn State University as well. She went on to earn a master’s degree in library science from George Peabody College in Nashville, TN. She also studied at Atlanta University and The University of Southern Mississippi. She was employed in the Walthall County Public School System for 42 years from which whe was retired in 1990.
Becoming a widow at a young age, she served in numerous positions within both state and civic organizations. She was also an active member of St. James United Methodist Church in Tylertown.
She is preceded in death by her husband, Jesse E.M. James and four brothers, Hollis, Marcus, Curtis Jr., and Charles James (C.J.).
Survivors are two sisters, Forence L. Coleman of Chicage, IL, and Mildred A. Brown of Tylertown; god-son, LaMansey Nelson; god-daughters, Ruby Pittman and Brenda Nelson; longtime friend, Annie Bell Holmes.
A graveside service was Aug. 12, 2021, Old China Grove Cemetery, Apostle Clayton Bullock delivering the eulogy and officiating, interment following.
Washington Funeral Home was in charge of the arrangments.