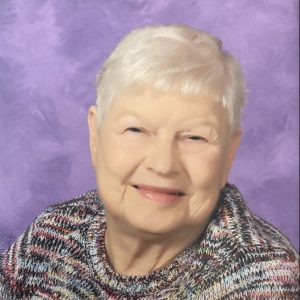 Faye Bullock
April 28, 1940 – Sept. 16, 2021
Gloria Faye Bullock, 81, of Jayess, died Sept. 16, 2021. She was born in Ruth April 28, 1940. A service was at Providence Baptist Church in Jayess Sept. 20, 2021, burial in the church cemetery, Rev. Scott Johnson and Rev. William Wall officiating.
Faye was married to her high school sweetheart Elton for 64 years. They moved to Bogalusa when Elton returned from Germany while serving in the Army. After 8 years they moved to New Orleans where she raised their two children while working for Sears Roebuck. She quickly rose through the company and when she retired in 1994 she was the unit director for the Mail Order Call Center in Mobile, AL.
Faye was devoted to her children, grandchildren and great grandchildren. She also was a surrogate mother to every pastor and their families as well as children that crossed her path and every employee that worked with her. So much so that she was known as “Mom Faye” to everyone.
She also enjoyed playing trains with the Thursday night train gang and planning adventures with the 50 Plus Club. In her earlier years she liked to go camping in a tent which eventually was upgraded to a Hi-Lo trailer. Her daughter Pam insists that Faye invented “Glamping”. They were the only family sleeping in a tent with a mini refrigerator. Camping was replaced by cross stitching, puzzles and coloring in the last several years.
She was a member of Providence Baptist Church for 27 years. Her faith in God and service to her church was unwavering. She could be counted on to do anything that was required often times without even being asked to help.
She is survived by her husband Elton, son Rick (Karen), daughter Pam (Jerry), grandchildren Kathryn (Ted), Lance (Laura), great grandchildren Sloane and Colette and a granddaughter-in-law Brandy Newton.
Faye was preceded in death by her grandparents Virgil and Mary Givens, her father, George Cothern, step father Thomas McGregor, mother Audrey McGregor, sister Irene Jones, brother Larry McGregor and grandson Christopher Newton.
Pallbearers were Lance Bullock, Isaiah Ard, Tom Conn, Wayne Rutland, Larry Eickenloff and David Cothern.
In lieu of flowers donations in Mrs. Faye Bullock’s name may be made to the cemetery fund of Providence Baptist Church.
Hartman Jones Funeral Home of McComb was in charge of the arrangements.