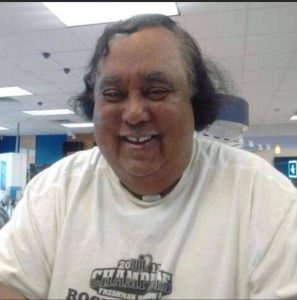 Larry Walker
Feb. 7, 1950 – Sept. 11, 2021
Larry Walker, 71, of Tylertown, died Sept. 11, 2021, at UMMC in Jackson after a brief illness. Walker was born Feb. 7, 1950, in Walthall County to Easley and Myrtis Lee Harrell Walker.
He received his education at Tylertown High School and later at Southwest Community College in Summit. After graduation, he briefly served in the U.S. Navy.
Upon exiting the military, he became one of the best brick layers in Walthall County and surrounding areas, later passing on the legacy to a special nephew, Jewlaska “Jack” Walker Jr. He also had a great passion for fishing, and became known as “Tightrope.” Later in life he became the owner of his own night club, The County Line Disco, and also operated Disco 9000. There he became a passionate disc jockey and was known as the “Love Doctor” on the turntables.
On June 25, 1971, he met and married the love of his life, Dorothy Jean Jackson. To this union was born four girls.
He was preceded in death by his parents, eight brothers, and three sisters.
Survivors are his wife, Dorothy Walker of Tylertown; his children: Shelia (Darriel) Fortenberry of Gastonia, NC, Angie Berry of Tylertown, Pamela (Toby) Clemmons of Magnolia, and Latoya Walker of Tylertown; one brother, Wiley Walker of Jackson; two sisters: Floyd Lee (Henry Ray) Ard and Jean Causey; 12 grandchildren: Tyson, Ashlee, Corbin, Tarrice, Audriana, Tyler, JT, Josh, Natoriaunna, Romelo, Kenyon and Adrienne; one great grandchild: Payton Asher Dillon.
Graveside services were Sept. 18, 2021, at Tylertown Cemetery with interment to follow.
Craft-Ginn Funeral Chapel was in charge of arrangements.