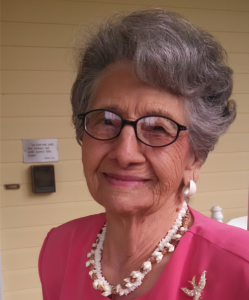 Mary McElveen
March 28, 1924 – Nov. 25, 2021
A private graveside service for Mary B. McElveen, 97, of Memphis, TN, was Nov. 29, 2021, Rev. Buddy Day officiating.
Mrs. McElveen, most recently, was a resident of Diversicare of Tylertown and died Nov. 25, 2021. She was born March 28, 1924, in Progress to the late Watson and Cora Brumfield. Along with her parents she is also preceded in death by her husband Ralph McElveen and brother Hilton Brumfield.
She was a longtime member of Bellevue Baptist Church, Memphis, TN. While her failing health restricted her the past few years, one of her greatest pleasures was attending and participating in her Sunday School class. The “Old Ladies” as she referred to them. She also enjoyed attending her grandchildren’s church, school, and sporting events. After her retirement from AT&T in Jackson, she moved to Eureka Springs, Ark., and spent her time cultivating beautiful flowers and in traveling, especially to Jerusalem. Visiting the Holy Sites in Jerusalem was one of her greatest pleasures.
Survivors include her daughter Karen (Gary) Pearcy of Stone Mountain, GA, and sons Bruce (Shirley) McElveen of Ridgeland, and Jeff (Kathy) McElveen of Oakland, Tenn.; nine grandchildren; 26 great grandchildren.
Pallbearers were Adam McElveen, David McElveen, Matthew McElveen, Caleb McElveen, Philip Black, and Gary Pearcy.
Hartman Hughes Capps Funeral Home was in charge of the arrangements.