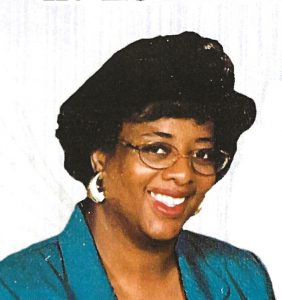 Cynthia Deemer
Dec. 4, 1957 – April 8, 2022
Funeral services for Cynthia Idell Celestand Deemer, 64, were April 13, 2022, at Smith Funeral Home, pastor Terry Weems officiating with interment at Magee’s Creek MB Church cemetery.
Mrs. Deemer died April 8, 2022. She was born Dec. 4, 1957, in New Orleans to the late Ernest Celestand Sr. and Irma Anthony Celestand.
She became a member of Second Zion Baptist Church No. 1 at a young age. She met and married Rev. Billy Ray Mims and they had sons, Terrell Wilfred and Derrick Wayne. Later she married Mernon Deemer and moved to Tylertown where she enjoyed her property and the friendship of those in her community.
She is a 1975 graduate of Francis T. Nicholls High School and went on to earn an associates degree from the University of New Orleans in business administration. She was a secretary at the Union Baptist Seminary and payroll processor at Lykes Bros. She was an educator at Sarah T. Reed High School in computer technology and was involved with the Jos for America’s Graduates program.
She was also a businesswoman. While in Mississippi, she enrolled at Southern Mississippi Community College where whe received an associate’s degree in applied science and joined the Phi Theta Kappa and then later participated in the entrepreneur training program of the entrepreneur center at the Mississippi Development Authority. Mrs. Deemer also became a licensed insurance agent in Mississippi, a notary public and the assistant director of Grayson Services of Corinth.
In addition to her parents, she was preceded in death by her husband, Vernon Deemer; her son, Derrick Wayne Mims; her brothers, Ernest Celestand Sr. and Kenny Ray Celestand Sr.; her sister, Ruby Jewel Ferguson; her sister-in-law, Patricia Celestand; her nephew, Kenny Ray Celestand Jr.
Survivors are her son, Terrell (Andi) Wilfred Mims; her daughter-in-law, Russhele Mims; her grandson, Derrick Wayne Mims Jr.; her granddaughter, Anaya Jones-Mims; her brother, Larry (Claudia) Celestand Sr.; her sisters, Barbara (Bobbie) Temple, Sandra (Lawrence) Marley; her sister-in-law, Hallie Celestand; her friend, sister Gaye Jordan; her honorary son, Paul Wimberly Jr.
Smith Funeral Home of Columbia was in charge of the arrangements.