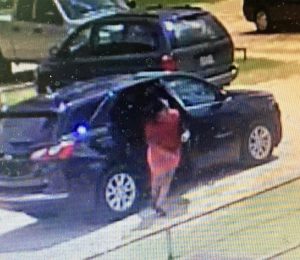 This photo is from a video taken at Walthall General Hospital. The suspect at the door of the dark SUV can later be seen walking up to another vehicle, smashing the passenger side glass, reaching into the vehicle and taking something before returning to her vehicle and fleeing the scene.

A $1000 Crimestoppers reward is offered for information leading to the arrest and conviction of the individual or individuals involved in at least four auto burglaries in the area and the theft of pistols from Tylertown Sports Center.
All the incidents have occurred over the past few weeks.
Police have posted photos on Facebook of several individuals wanted for questioning after three cars parked at Holmes Water Park were broken into and purses stolen the afternoon of July 24.
The perpetrators used the victims’ credit or debit cards to make purchases at Wal-Mart, Columbia, and Dollar General at Sumrall.
Another vehicle theft occurred earlier at Walthall General Hospital. A subject got out of a black SUV type vehicle, walked up to a parked car, broke the passenger window and reached in to make away with a purse.
The accompanying videos and photos were obtained in connection with the above incidents.
No video is available of a subject or subjects who entered Tylertown Sports Center on Plaza Drive over the extended July 4 weekend, shattering the front door glass, entering the store and grabbing three AR-15 style pistol, then exiting the store and making his getaway.
Contact Tylertown police, 876-4440; Walthall Sheriff’s Office, 876-3481; or Crimestoppers, 844-786-7200. All Crimestoppers tips are anonymous.
Posted in Breaking News, News 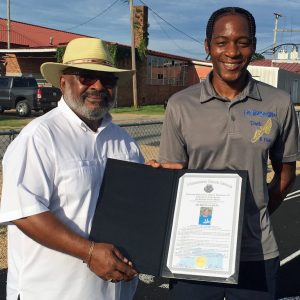