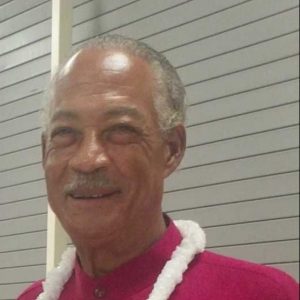 Charles McCaskill
Oct. 25, 1943 – July 20, 2022
Charles Waddell McCaskill died July 20, 2022 at the age of 78. He was born Oct. 25, 1943, to Emmett Scott and Rosie Harris McCaskill, a vocational and agriculture administrator and a home economics teacher. He grew up in Eupora and graduated from Alcorn Agricultural and Mechanical College in Lorman with a degree in biology. There he participated in Alcorn’s “Sound of Dynamite” marching band, sang in the choir for four years and was a featured player in the Alcorn Swing Band. He also played piano, trumpet and saxophone professionally with the Rocking Royals of Natchez, traveling the Mississippi River playing in surrounding cities. The Royals disbanded just as they were gaining popularity outside of the South when five of the band members were drafted to serve in the Vietnam War.
At Alcorn, he met the love of his life, Vernadette Lee of Sandy Hook. While the couple was keen to marry their junior year, the State of Mississippi didn’t allow marriage without parental consent before age 19. Vernadette’s parents refused to sign for her to be married before her college graduation. Undeterred, the couple graduated from Alcorn in May 1964, he turned 19 in October, Vernadette turned 19 in November and the couple were married two weeks later on Dec. 20. They were married 57 years and became the proud parents of three children: Christopher (Dmitri), Sonja and Andrew.
McCaskill spent the first 10 years of his professional life teaching biology and band in the Mississippi public school system. His proudest accomplishment as an educator and band director was when his Franklin County High School band received an invitation to perform during the Grambling State University half-time show. A year later, he would end his teaching career to join Exxon Company, USA as an offshore foreman and move his family to Walthall County. He worked the seven-days-on and seven-days-off schedule for the next 26 years. Upon retirement, he started his own trucking company and later was an insurance salesperson for Washington Funeral Home.
His children proudly make the following comments: “Charles McCaskill had a PhD in joy. He was an incredible provider, but he was also a fierce and fearless protector. He loved music, cars and rebuilding engines. He could fix ANYTHING. He was an outdoorsman who loved fishing and to bring home dinner from his catch. He adored his wife and doted on her incessantly. He was a family man who loved being with his kids and grandkids. He was slow to anger, patient, kind and generous. He worked hard and lived a big life. When he laughed, he laughed with his whole body, and he loved with his whole heart.”
McCaskill is survived by his wife, Vernadette; his three children; daughter-in-law, Yalanda; three grandchildren, Christandre, Tryston and Caden; his brother, Emmett (Cornelia). He was preceded in death by his sister, Connie Delein Johnson (Pirl).
Washington Funeral Home was in charge of the arrangements.