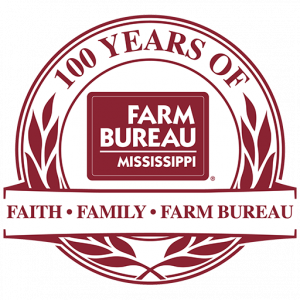 Farm Bureau Federation celebrates
a century of service to Mississippi
The Mississippi Farm Bureau celebrates the 100th birthday of the organization this year, and Walthall County has been along for the ride since the organization’s inception. At that time, most of Walthall County’s population lived and worked on the farm, and cotton was the major crop, as well as row crops and livestock.
A Times advertisement this week outlines the benefits of Mississippi Farm Bureau Federation membership, not only for farmers, but residents from all walks of life. For information on member savings and benefits, visit msfb.org/discounts.
Established in October 1922, the group was formed by Mississippi farmers to promote the state’s crops, including cotton. Prior to the charter of the federation, members of the leadership team formed the Mississippi Farm Bureau Cotton Assn., launching a cotton drive that ran from Oct. 15 – Dec. 23, 1922, seeking to receive a commitment of 200,000 acres of cotton from counties outside the Delta.
State Rep. Bill Pigott of Tylertown, who serves as House Agriculture Committee Chair describes Farm Bureau as the only truly active commodity organization representing agriculture.
“I’ve been involved with the organization more years than I can count,” Pigott said. “It’s been helpful to me to keep up with what’s going on in the industry. It’s amazing it’s lasted 100 years. I hope that we see another 100 years.”
Farmers and rural communities have seen many changes over the past century. The state’s farmers now utilize their acreage in more productive ways, due to educational efforts promoted by the Federation.
In 1922 Mississippi’s total farm acreage was 18.1 million acres, while today it’s a bit over half that figure, 10.4 million acres, but production is much more.
A hundred years ago there were 8.9 million broilers in the state, today there are 737 million. In 1922 the state produced 194.2 million eggs, today it produces 1.4 billion. A century ago, Mississippi’s 5,345 acres of peanuts produced 1.8 million pounds. In 2022, Mississippi farmers planted a little over three times the acreage of a hundred years ago, 17,000 acres, but produced 69.7 million pounds, an increase of almost 39 fold.
There are 34,700 farms in the state today, compared to 264,664 in 1922. Then, the average farm size was 68 acres, while today it is 300. The promotion of cotton statewide, outside the Delta, helped spur the Farm Bureau Federation in 1922. At the time, when cotton was still King, Mississippi produced 1.1 million bales harvested from 3 million acres. Today, the state produces 1 million bales from 430,000 acres. In 1922 the total commodity production value was $8.1 million, while this year it is $8.3 billion.
The success of Mississippi Farm Bureau can be proven by steady increases in production and the efficiency of the state’s farmers.
As the Voice of Mississippi Agriculture, in recent years Farm Bureau supported legislation included the Mississippi Boll Weevil Management Act, the Agricultural Liming Materials Act and establishment of the state’s Agricultural and Livestock Theft Board.
Farm Families of Mississippi was formed, utilizing multiple forms of advertising to promote the importance of agriculture to consumers.
In 2011, Mississippi became the 44th state to restrict the use of eminent domain for private development after MFBF led a two year campaign resulting in the issue being put on the ballot. Farm Bureau also supported legislation placing a cap on agricultural use value.
Other legislation protecting and promoting Mississippi farm families includes the Right to Farm bill, the Landowner Protection Act and the FARM (Furthering Agriculture for Rural Mississippians) fund, a political action committee formed to support the agricultural industry.
As a grassroots organization, Farm Bureau begins at the county level and proceeds through state and national levels, and remains at the forefront of economic, technological and legislative developments contributing to the success of both Walthall and Mississippi farmers.