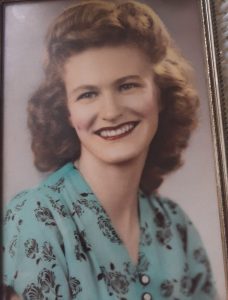 Ida Arnold
Aug. 26, 1926 – May 28, 2020
A graveside service for Ida Jane Arnold, 93, of Metairie, was June 4, 2020, at Tylertown Cemetery.
She died at her home on May 28, 2020. She was born in Tylertown August 26, 1926, to Nell and Douglas McGaughey. She later attended nursing at Charity Hospital in New Orleans and remained a skilled compassionate nurse for her entire career. She joined Redemption Church in Lacombe, LA after moving to Lacombe, LA in 2005. She was previously a resident of Metairie for over 50 years.
She was preceded in death by her parents; two brothers Ronald McGaughey and Donald McGaughey; and her husband Hilton Dan Arnold.
Survivors include her daughter Diane Arnold Marie; son David E. Arnold (Kathy); grandson Joseph Maestas (Vanessa); granddaughters Penny Viscomi (Pete) and Kathy Hill (Jackie) as well as six great grandchildren and one great great grandchild.
Pallbearers were Joe Maestas, Michael Budde, Garrett Viscomi and Jackie Hill, Jose’ Budde, and Nico Budde.
Hartman Hughes Funeral Home was in charge of the arrangements. Family and friends may sign an online guestbook at www.hartmanhughesfuneralhome.com