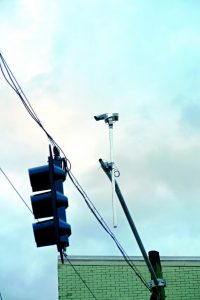 For several weeks now, work has been underway on a Mississippi Department of Transportation project to mill and overlay Hwy. 198 through the middle of Tylertown.
Along with the overlay project is an upgrade of the traffic signals at the downtown intersection of Hwy. 198 and Hwy. 27.
Several devices are mounted at the intersection, and while curious passersby have thought them to be cameras, they are actually traffic detection devices, designed to read traffic flow.
The devices will also work in conjunction with “walk-don’t walk” pedestrian signals being installed at the four corners of the intersection.
Work on the project is running ahead of schedule and MDOT expects work to be completed in January. It was originally scheduled for an April completion date, said Katey Roh, MDOT public information officer.
Wiring of the “walk-don’t walk” signals is being completed. MDOT is awaiting delivery of the signals from the factory before they are installed.
Most of the milling and overlay work of the highway has been accomplished at night in order to avoid traffic interruptions that would occur during daylight hours when vehicle traffic is heaviest through downtown.
The length of highway being reworked stretches from the intersection of Hwy. 198 and Hwy. 48 West to the junction of Hwy. 198 and Hwy 48 East.
Hwy. 198 is now designated as a state route since construction of the four-lane bypass which carries U.S. 98 through the north side of town.
The $782,568 project was awarded to Dickerson & Bowen of Brookhaven. Funding comes from $80 million in state lottery proceeds designated for transportation maintenance needs.