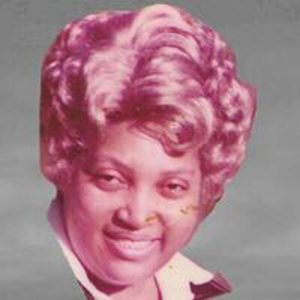 Almae Robinson
May 19, 1932 – April 30, 2021
Almae Robinson, 88, of Sandy Hook, died April 30, 2021, at Columbia Rehabilitation and Healthcare Center in Columbia.
Born May 19, 1932, in Sandy Hook, she was the daughter of the late Elijah Galloway and Alberta Green Galloway.
She moved to Chicago, IL, in pursuit of employment and worked in retail and housekeeping for several years before eventually retiring. She met her husband Frank Robinson in Chicago and they remained married until his death.
During her childhood she was a member of Sunlight M.B. Church. While in Chicago, she became a member of the Greater Mt. Sinai M.B. Church. She returned to Sunlight M.B. Church after moving back to Mississippi and served as a member of the choir until her health began to fail.
In addition to her parents and husband, she was preceded in death by her brother, Jewel, and sister, Barbara Galloway Hargrove.
Survivors are her daughter Yvonne White of Sandy Hook; son, Larry (Rita) Weary of New Orleans; three grandchildren, Patrick Evans Sr. (whom she helped rear), of Columbia, Quatressa Weary of New Orleans, Quinton Weary of New Orleans; brother, Elijah Galloway Jr. of Sandy Hook, two sisters, Hazel Harry of Milwaukee, WI, and Daisy Martin of Sandy Hook.
A service was May 7, 2021, at Sunlight Missionary Baptist Church with Rev. Charles Galloway rendering the eulogy and officiating, interment in the Sunlight MBC Cemetery.
Pallbearers were Robert Lewis Jr., Reginald Lewis, Antwon McGowan, William Owens, Patrick Evans Jr. and Antwon Brent.
Honorary pallbearers were Larry Weary, Patrick Evans Sr., Robert Lewis Sr., Quinton Weary and Elijah Galloway Jr.
Washington Funeral Home was in charge of the arrangements.