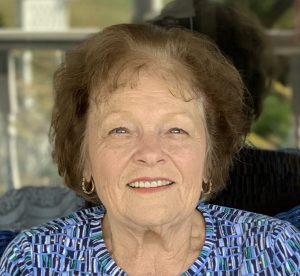 Barbara Breland
Oct. 25, 1942 – May 3, 2021
Barbara Faye Breland died May 3, 2021. She was born to Kirby and Daisy Smith on Oct. 25, 1942 in San Diego, Calif. After her father finished his armed service duty, they moved back to New Orleans where she grew up alongside brother Kirby Jr. and sister Beverly.
After graduating from high school, she married Willis Francis Breland Jr. in 1961. Shortly after, they welcomed their son, Willis Francis Breland III, and daughter Brenda Anne Breland into the world.
Mrs. Breland was a homemaker by trade, and took care of their family horse, bunnies, chickens, and dogs.
After the death of her husband, she moved to Peachtree City, GA, to be near her daughter. Mrs. Breland enjoyed spending time in her yard, singing in her church’s choir.
She was preceded in death by her husband Willis Frances Breland III, her brother, Kirby Jr., and her parents Kirby and Daisy Smith. Survivors are her children Sonny Breland and Brenda Powell (Bruce), her sister Beverly Losch (John), her grandchildren Lauren Davis (Dylan), Lindsey Berggren (Carl), Mitchell Breland and Cassidy Powell and her great grandchildren Aria Davis, Micah Davis, Josie Davis, Zoey Davis, and Berggren twins to be.
The funeral service was May 8, 2021, at Hartman Hughes Funeral Home.
In lieu of flowers, the family requests contributions to The Midwest Food Bank in Peachtree City, GA.
Hartman Hughes Funeral Home was in charge of the arrangements. Family and friends may sign an online guestbook at www.hartmanhughesfuneralhome.com