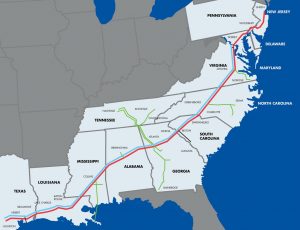 The Colonial Pipeline stretches from Texas to the New York harbor transporting more than 100 million gallons of fuel daily. Its been shutdown since Friday in order to contain a cyberthreat to the system.

A criminal group originating from Russia named “DarkSide” is believed to be responsible for a ransomware cyberattack on the Colonial Pipeline, according to a report on CNN.
Monday was the third day the pipeline remained shut down causing concerns about rising fuel prices. Gas prices will likely be affected if the shutdown remains in effect for several days, a concern, especially as it will have an impact on summer travel. In addition, the rising prices will have an effect on air travel as jet fuel is another of the components using the pipeline.
The pipeline, which transports more than 100 million gallons of gasoline and other fuel daily from Houston to the New York Harbor, passes through Walthall County, delivering over half of the fuel supply to the East Coast.
Colonial said it learned of the cyberattack attack Friday, causing it to pause operations. It is working to develop a restart plan for its system, which was temporarily shut down to contain the threat.
The company’s main lines remain offline, but some smaller lines between terminals and delivery points are now operational.
The company said in a statement Sunday, it “will bring our full system back online only when we believe it is safe to do so, and in full compliance with the approval of all federal regulations.”
The Department of Energy is leading the federal government response, according to the company, which was also engaged with the FBI and Department of Homeland Security.
Tanker truck drivers will be allowed to work longer hours after a federal emergency declaration on much of the East and Gulf Coasts in response to the pipeline shutdown, the US Department of Transportation said Sunday. The exemption applies to transporting gasoline, diesel, jet fuel and other refined petroleum products to Alabama, Arkansas, the District of Columbia, Delaware, Florida, Georgia, Kentucky, Louisiana, Maryland, Mississippi, New Jersey, New York, North Carolina, Pennsylvania, South Carolina, Tennessee, Texas and Virginia.
Posted in News