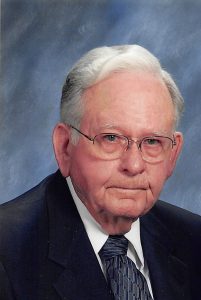 T J Burch
Feb. 18, 1926 – Sept. 2, 2021
Funeral services for T J Burch, 95, of Tylertown, were Sept. 4, 2021, at Hartman-Hughes Funeral Home with Rev. Justin Knight and Rev. Buddy Day officiating, burial in the New Zion Cemetery.
Burch died in Tylertown Sept. 2, 2021. He was born Feb. 18, 1926, in Walthall County to the late Wallace Tom and Nola Pierce Burch. Along with his parents he was preceded in death by siblings Pauline Deavers, Faye Roberts, Snellings Burch, Madge Alford, Katherine Burch, and Odeal Johnson.
Burch was a lifelong resident of Walthall County. The day after his high school graduation he joined the U.S. Navy and served two years in the South Pacific during World War II. He was proud to be a veteran of Walthall County Post 56 American Legion’s oldest member. He attended Southwest Community College and Mississippi State University. He was a local business owner of a Cross Country Trucking Co. for 29 years and a bookkeeper for Lexie Water Assn. for 19 years until his retirement. He was a longtime member of Tylertown Baptist Church. Being outside riding his tractor and raising his beef cattle was one of his favorite pastimes. But the most important thing in his life was the time spent with his family.
Survivors include his wife of 67 years Eleanor Ann Pigott Burch; daughter Sheila (Sonny) Burch Murray; sister Marie Campbell.
Pallbearers were Joe Dowe, Keith Fortinberry, Robert Jones, Mike Pigott, Lyndell Rushing, and Bruce Woods.
Honorary pallbearers were Adris Brock, Altus Holmes, Larry Holmes, and Jim Schmidt.
Hartman Hughes Funeral Home was in charge of the arrangements. Family and friends may sign an online guestbook at www.hartmanhughesfuneralhome.com