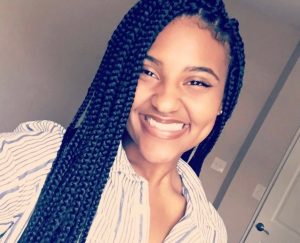 Ebony Toliver
April 8, 1994 – May 1, 2022
Ebony Patrice Toliver, 28, died May 1, 2022. She was born April 8, 1994, in Canton to Nguyen (Gwen) Walker and Ronald Barnes.
After graduating Provine High School in Jackson, she continued her education at Mississippi State University. She then relocated to Atlanta, GA, to begin her career as a personal shopper.
After her journey of entrepreneurship, she pursued her lifelong goal of becoming a flight attendant and did so with United Airlines.
She was preceded in death by her grandparents Sarah Barnes, Mattie Walker, and James Walker Sr. and her stepfather, George Sears.
She is survived by her mother, Nguyen Walker; her father, Ronald Barnes; her grandfather, Rev. James W. Barnes; her sisters, Joslyn Hartfield (Frank), Rasheema Toliver, Kimberly Sears, Karisma Barnes and Samantha Barnes; her brothers, Jonathan Toliver, Jeremy Sears, and Jeremiah Sears; her nieces, Kailynn, Blaire, Kylin, and Janiya; her partner, Richard (Rich) Huggins.
Memorial service for Ms. Toliver will take place Saturday, May 7, 2022 at Craft-Dillon-Ginn Funeral in Tylertown, MS at 2PM.
Craft-Dillon-Ginn Funeral Chapel was in charge of the arrangements. Share online condolences at www.craftdillonfuneralhome.org.