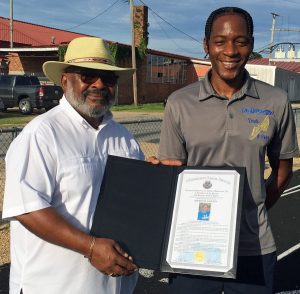 THS track and field coach, Myreon Sartin, is presented a copy of a State Senate document in recognition of his being named State Track and Field Coach of the Year and accomplishments as a coach. Sen. Kelvin Butler, left, made the presentation.

Tylertown High School track and field coach Myreon Sartin was recognized by the Mississippi State Senate for his achievements and being named track and field Coach of the Year. The document is signed by Lt. Gov. Delbert Hosemann and Sen. Kelvin Butler.
The presentation was made recently by Sen. Butler.
The document points to the success of the THS boys track team, winning eight state championships in nine seasons; closing the season this year with 149 points at the Mississippi High School Activities Assn. Class 3A State Championship meet, 57 points ahead of the second-place team.
It also cites the team for having earned five individual state titles and a pair of relay teams for also winning state titles.
It was noted that Sartin also coaches the Tylertown High School girls track team, placing fourth in the state and winning two relay titles.
The Senate recognized Sartin as an all-conference high jumper while at the University of Southern Mississippi before assuming Tylertown’s track program in 2014; for his training company, BounceFit Athetics; and XCELL Athletic Track and Field Club, which contributes to Tylertown’s success in helping young athletes gain experience before high school.
“…Coach Sartin is driven by a desire to promote participating in track across the state,” the document concludes. “He and his trainers have put Mississippi on the map at national track events. Sartin takes pride in the positive publicity their efforts and success have bestowed upon our great state.”