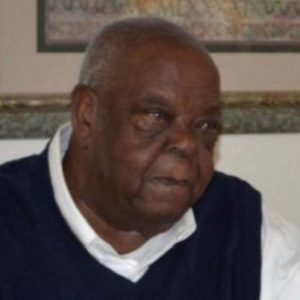 Claude Williams Jr.
Aug. 5, 1936 – Jan. 8, 2023
Claude Williams, Jr., 86, of McComb, died Jan. 8, 2023 at Providence Hospital in Mobile, AL. He was born Aug. 5, 1936, to Claude Williams Sr. and Lizzie Barnes Williams.
Funeral services were Jan. 14, 2023, at St. James Missionary Baptist Church, McComb, with Rev. James Banks officiating and rendering the eulogy, interment at St. James Missionary Baptist Church Cemetery.
In his early years he attended Rose Hill School. There he met the love of his life Bonita Yvonne Cook Williams (deceased). This couple was joined in marriage in August 1953. To this union eight children were born. Together they accepted Christ in 1963.
He was employed for over 40 years with The Illinois Central and Gulf Railroad where he started as a “porter” and rose to the ranks of “conductor” before his retirement
For 50 years he was a ordained deacon and member of St James Missionary Church. He also served as Sunday School superintendent, a member of the sanctuary choir, and helped organize a male choir. He was also a long time member of the West Pearl River Assn. and the Leggett Community Brotherhood. He was also a lover of baseball and played in his younger days. As he got older he would transport, coach and talk to young men about life and serving God. He was also a avid hunter with at one time having 20 dogs.
He was preceded in death by his parents, his wife and three sons: LaDerrick, Jerry Cardell and James Anthony Williams.
Survivors are his children, Michael A Williams (Doris), Frankie Williams Nunnery (Sylvester), Janice Williams Taplin (Walter), Gay Williams Magee ( Denver), Lisa Williams Augustine; 15 grandchildren, 12 great-grandchildren and one great great grandchild.
Washington Funeral Home was in charge of the arrangements.