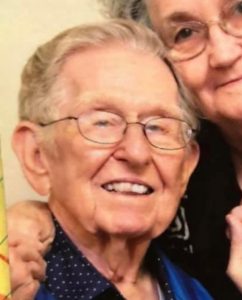 Howard Alexander
July 9, 1931 – April 25, 2020
Howard Alexander was born to Lemmie and Lottie Carney Alexander on July 9, 1931, in Jayess. He died April 25, 2020.
He was a member of the kingdom of God and worshipped at Powell’s Grove Church which he made his home church many, many years ago. He was a friend to every pastor he had and served as their church secretary/ treasurer.
He was one of the first employees of Croft Metals in McComb, holding only one job his entire life. He gave everyone a chance and a place to work regardless of race, education, or past failures.
Survivors are his wife of 66 years Gertie Hawn Alexander, one sister Rebecca Hawn; four daughters and three sons all of Jayess: Deborah (Mark) McCain, Stephanie Wuninger, Becky (Harold) Thornhill, Aletha (Lance) McCloud; eight grandchildren, Anna (Chad) Boyd, Leigh (Stephen) Hall, Kim (Jeff) Stokes, Kara (Eric) Toomer, Natasha Walters, Nathaniel (Missy) Thornhill, Teah, and Matthew Thornhill; and 20 great grandchildren.
He was honored at a graveside memorial service at Greer’s Cemetery April 27, 2020, at 11:00 A.M.
Pallbearers were his great grandsons: Trevor Thornhill, Chris, Michael, and Logan Walters, Ethan Boyd, Brently and Brandley Hall, Crockett, Holt and Sutton Stokes, and Everett Toomer.
Honorary pallbearers were his great granddaughters: Nataleigh Boyd, Katie and Emma Thornhill, Sophie Walters, Britian Hall and Eloise and Adeline Stokes.
Capps Funeral Home was in charge of the arrangements. Family and friends may sign an online guestbook at www.hartmanhughesfuneralhome.com