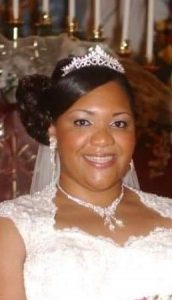 Teresa Batiste
Feb. 10, 1983 – June 3, 2020
Teresa LaShun Batiste was born Feb. 10, 1983, in McComb to Dennis and Myrtis Hodges. She was the fifth of six children. She dedicated her life to Christ at an early age as a member of the Pink Hill Missionary Baptist Church. She later relocated to Houston, TX, where she was a member of The Church Without Walls, under the leadership of Pastor Ralph West. On Aug. 10, 2013, Teresa returned home to McComb to marry Gregory Batiste.
She graduated from South Pike High School in 2001 and furthered her education at the University of Southern Mississippi. She later received her associate’s degree in applied science from Pearl River Community College in 2004, and became an LPN. She later returned to receive another associate’s degree in applied science in 2008, and began her career as a registered nurse. She obtained her bachelor’s of nursing from Lamar University in 2016. She was then employed as a director of nursing.
She died June 3, 2020. She is preceded in death by her sister Shirley Hodges, grandfathers Earnest McGowan Sr. and Robert Rembert, grandmother Norma Hodges.
Survivors are her husband Gregory Batiste, Jr.; three children Damarcus, Gabrielle, and Christopher Batiste of Hockley, TX; parents Dennis and Myrtis Hodges of McComb; three brothers and one sister, Jeffery (Sharon) Hodges of Richmond, VA, Jeromy (Lashunda) Hodges of Baton Rouge, Michael (Delilah) Hodges of Katy, TX, Kimberly (Rod ) McCurdy of Katy, TX; nephews, Michael C. Hodges and Ryan A. McCurdy; niece Ava E. Hodges; father-in-law, Gregory Batiste, Sr. of Fort Worth, TX; grandmother Sarah McGowan of McComb.
A private funeral service will be held with Rev. Elton McEwen delivering the eulogy and officiating, interment in the McGowan Family Cemetery.
Washington Funeral Home was in charge of the arrangements.