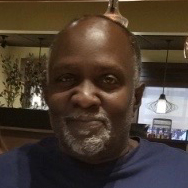 Gerald Dowell
Nov. 9, 1963 – Dec. 23, 2020
Gerald Devon Dowell, 57, of McComb, native of Tylertown, died Dec. 23, 2020, at Southwest Regional Medical Center following a brief illness. Dowell was born Nov. 9, 1963, in Walthall County to the late Catherine and Eddie Causey
Graveside services were Dec. 29, 2020, at Tylertown City Cemetery, with Clayton Bullock officiating.
Gerald believed in God, and chose to show his belief through actions. Through the years he worked in construction, mostly specializing in painting and drywall. He used his skills as a construction worker to help others in the community whenever they were in need.
Gerald was preceded in death by his mother Catherine; his father Eddie; stepfather, Jase; and grandparents, Alcee and Ozella.
Survivors are his siblings: Ricky (Jenice) Dowell, Shiona (Esmail) Bullock, Sibao (George) Dunham, Terry (Lisa) Causey and Shirley Smith.
Craft-Ginn Funeral Chapel was in charge of the arrangements.