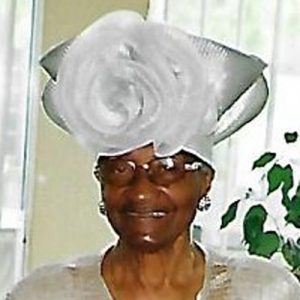 Zettie Bridges
Jan. 24, 1923 – April 11, 2021
Zettie Bridges, 98, of Tylertown, died at her daughter’s residence in Jackson April 11, 2021, surrounded by her family. She was born to Gertude James and George Bridges in Tylertown Jan. 24, 1923.
Graveside services were April 16, 2021, at New Bethel UM Church, pastor Terry Thomas officiating, interment in New Bethel UM Church Cemetery.
She was a lifelong resident of Tylertown in the East Sunny Hill community. She was a very active participant in fighting for voting rights for black people in the state of Mississippi, which helped the 1968 Civil Right Act become law. She voted in every election up until November 2012 and stressed the importance of civic engagement to her family and community. Everyone knew Mrs. Bridges for her love of flowers, gardening, food specialities and what people today would consider folk art. She was an active and faithful member at New Bethel Methodist Church until her health began to decline. She was a member of the motherboard for many years and a member of the Eastern Stars.
She was a domestic technician for several families in Tylertown and Stringer Industries. Her work was more than just providing clean spaces for people. She was a counselor, mother figure and confidant to many of her employers. She’d been a part of some of these families from the time they were babies up until they were rightfully old themselves.
Ms. Bridges is survived by her five children, John Ella Smith of Hayward, Calif., Jo Evelyn Marshall of Magnolia, Georgia Jean Bridges-Osby of Jackson, Jessie Renee Bridges of Meridian, and Matthew George Bridges (Vanessa Bridges) of Houston, TX; 20 grandchildren, and her brother Rodger Bridges.
She was preceded in death by her mother, Gerturude James; her daughters, Rossetta Bridges and Edna Pearl Bridges; her grandsons Dwight Lee Martin, Charles Edward Lee and Keith Andrea Martin; her brothers Matthew Magee, Eugene Bridges, Kermit Bridges and Sam Bridges and her sister Floydie Mae Waller.
Craft-Ginn Funeral Chapel was in charge of the arrangements.