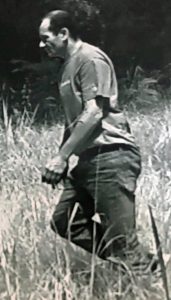 The Walthall County Sheriff’s office is looking for the identity of this man as a possible suspect in a burglary. If you can identify this person, contact the Walthall Sheriff’s Dept. at 601-876-3481.

Sheriff’s officers responded to several incidents recently, according to the department’s offense records.
Kentrell Howard, Old Hwy. 24 East, filed a burglary report. He said someone broke into his mobile home and pulled a gun on him.
John Blancett reported a 2018 Kenworth 18-wheeler stolen from Clyde Rhodus Road.
Deputy Cole Andrews responded to 139 Alton Boyd Rd. in reference to a suspect breaking window as an agent was trying to repossess a vehicle. David T. Jenkins, Reedy Creek Road, Laurel, made the report.
The sheriff’s office took a report of a burglary at 541 Hwy. 48 East. Property missing included televisions, lawn and garden equipment and antiques and collectables.
William Smith, Lablanc Road, Magnolia reported his girlfriend’s sister threatened to shoot him at a residence on City Landfill Road.
Grace Forrest, West Sunnyhill Road, said several items were taken from her residence while she was hospitalized including clothing, power and hand tools and household goods.
Deputies were dispatched to a family disturbance on Ginntown Road.
Posted in News