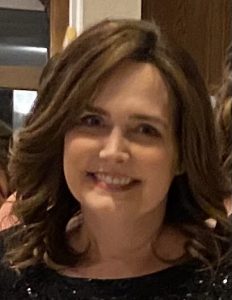 Jane Moore
March 10, 1970 – April 1, 2022
Jane Ann Lampton Moore, MD, 52, of Jackson, died after a six-month battle with cancer on April 1, 2022, at her home.
The only daughter of Dr. and Mrs. T. D. (Bob) Lampton, she was born March 10, 1970 in Jackson at the old Baptist Hospital. She was the youngest of their five children and grew up on Kings Highway in Jackson, attending Jackson Academy, where she formed life-long friendships. As a senior there, she was selected Most Beautiful in her class.
She attended Rhodes College in Memphis, where she studied art. After two years, she decided to pursue medicine and transferred to Mississippi College, later graduating from the University of Mississippi. She obtained her medical degree from the University of Mississippi School of Medicine in Jackson in 1999 and completed a residency in Family Medicine at Duke University Medical Center in Durham, NC, where she served as chief resident.
She married Dr. Alan Moore in 1999. Her greatest joy was her husband and three children Olivia, Lampton, and Lytle. She loved her hometown of Jackson, especially the Belhaven neighborhood and her supper club. She was an engaged mother in the lives of her children at First Presbyterian Day School and Jackson Preparatory School, supporting their involvement in academics and sports. She was an active member of First Presbyterian Church and cherished her Thursday morning Bible study and Stewards Sunday school class.
In her youth, she was a competitive swimmer for River Hills Swim Team, holding several city records, and later coached the club team (the River Rats) for many years with her brother Luke, winning several city championships. She was also a competitive tennis player who won state championships in high school and played varsity tennis at Mississippi College.
She was an artist in various formats, especially watercolors and oils. She was a student of Sam Gore and Wyatt Waters, whose teaching and work inspired her style and art. While a medical student, one of her watercolors and one of her oil paintings were selected as winners in the Frank Netter National Art contest. These works were featured in two issues of the Journal of the American Medical Association in 1999. Her art also graced two covers of the Journal of the Mississippi State Medical Association. A lithograph she created of Eudora Welty, which Welty admired, was exhibited at the Eudora Welty Library in Jackson and remains part of their permanent collection.
She practiced Family Medicine at Lincoln Community Health Center in Durham, NC, and served as a Family Medicine consultant at Duke University Medical Center there. After her return to Mississippi, she practiced family medicine with her brother Luke at Magnolia Clinic in Magnolia, serving on its board of directors and as a family physician.
She is survived by her husband Alan; daughter Olivia; and sons Lampton and Lytle, all of Jackson. She is also survived by her mother, Sara Lea Lott Lampton of Magnolia; four brothers: Ted Lampton of Flowood; Dr. Brett Lampton and wife Chancie of Oxford; Dr. Luke Lampton and his wife Louise of Magnolia; Mark Lampton and his wife Nicole of Jackson; and numerous nieces and nephews.
She was predeceased by her father in 1998.
A memorial service was April 4, 2022, at First Presbyterian Church in Jackson by Rev. Wiley Lowry, a graveside service at Tylertown Cemetery.
Pallbearers were her four brothers; brother-in-law, Dr. John Roger Moore, IV, of Pinehurst, NC; and nephew, Robert John “Jack” Lampton of Jackson.
In lieu of flowers, the family requests that memorials may be made to First Presbyterian Church or the charity of your choice.
Sebrell Funeral Home in Ridgeland was in charge of the arrangements. To send flowers or plant a tree in memory of Jane Ann Lampton Moore, MD, visit the Tribute Store.