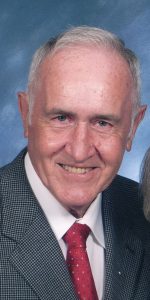 Charlie King
May 24, 1933 – Sept. 28, 2022
Services for Charlie J. King, 89, of Brookhaven were Sept. 30, 2022, at Riverwood Family in Brookhaven, interment at Macedonia Baptist Church cemetery.
King died at his home Sept. 28, 2022. He was born on May 24, 1933, to the late George and Velma King. He was married to the love of his life, the late Lucy Case King, for 70 years.
In addition to his wife and parents, he was preceded in death by his sisters, Mildred Turner, Hilda Mae Hedgepeth, Cloyce Neely and Walene Lambert.
Survivors are his children, Cathey (Ricky) Ferguson, Scott (Sharon) King, Chris (Lydia) King and Cindy (Conrad) Mord; grandchildren, Seth Ferguson, Tye (Soon) Ferguson, Kala (Dalton) Bradley, Brittany (Jeff) Williams, Brooke (Jacob) Morse, Carlie Smith, Lindi (Coby) Smith and Sarah Beth King; 16 great-grandchildren; brother, Buddy Ward.
He graduated from Monticello High School, Copiah-Lincoln Junior College and Mississippi College where he also earned his master’s degree. He played varsity football at Co-Lin and Mississippi College. King served in the U.S. Army, Military Police Branch at West Point Military Academy in New York.
He taught and coached at Wesson High School and taught at Co-Lin Junior College, after which he began his banking career at the Bank of Wesson, Trustmark National Bank at Wesson, then Tylertown and finally Bank of Brookhaven. He was in the banking profession for over 50 years. He was a graduate of both Ole Miss and LSU Schools of Banking.
King was a long-time member of the Copiah County School Board, Wesson and Brookhaven Lions Club and Tylertown Rotary Club. He enjoyed golfing, fishing, quail hunting and woodworking. He and Lucy enjoyed supporting all the activities of their children, grandchildren and great-grandchildren.
He was an active member of Macedonia Baptist Church where he served as a deacon and long-time Sunday School teacher.
In lieu of flowers, donations may be made in his memory to Macedonia Baptist Church in Brookhaven or Tylertown Baptist Church Elevator Fund.
Riverwood Family Funeral Service of Brookhaven was in charge of the arrangements. Condolences and other information are available online at www.riverwoodfamily.com.