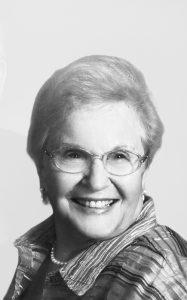 Jean Ivy
March 12, 1931 – Sept. 28, 2022
Jean Cooper Ivy, 91, died at her home on Sept. 28, 2022. She was born in Rolling Fork March 12, 1931, to the late Lora Westbrook Cooper and Alton Cooper. Her love of the Delta continued throughout her life. She was also preceded in death by her husband of 64 years, Charles E. Ivy, and most recently by her only sibling, Alton Wayne Cooper.
Jean attended Mississippi College where she met and eventually married her husband, Charles. In 1956 they were offered a position with Farm Bureau Insurance in Tylertown. She was a member of Mesa Baptist Church where she played the organ for many years, taught Sunday School and sang in the choir, but she is best remembered for the years she devoted to Bible Drill. Jean was an avid traveler, especially by train, and saw all of the U.S. and much of the rest of the world.
Survivors are her daughters, Pat (Rick) Lyon and Debbie Ivy, and her son, Ronnie (Ruth) Ivy; her grandchildren, Ashley (Jeremiah) Norman, Jason (Holly) Ivy, Chris Ivy and Olivia (Eddy) Reynolds; great grandchildren Brennan Norman, Steele Norman and Wade Mercer.
A graveside service was Sept. 30, 2022, at Hillcrest Memorial Gardens with Rev. Clay Spinks officiating. Per her request, there will be no memorial service. It was her wish that any memorial tribute be made to her favorite charity, Samaritan’s Purse/ Operation Christmas Child.
Hartman-Hughes Capps Funeral Home was in charge of the arrangements. An online guestbook may be signed at www.hartmanhughesfuneralhome.com