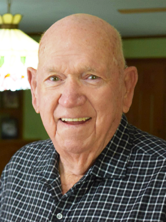 George Brumfield
April 12, 1935 – June 15, 2020
George Glen Brumfield died June 15, 2020, at the Mississippi Baptist Medical Center. He was 85.
Born in Tylertown April 12, 1935, he was the son of the late Elisha D. and Ruby Dell Ainsworth Brumfield. After graduating Salem High School, he enlisted in the U.S. Air Force where he served his country and was honorably discharged in 1958.
Brumfield began his long career with Roadway Transportation Co. in 1969 and retired in 1982. After several years of retirement, he joined The Home Depot as an associate in 2000. For the next 20 years, George enjoyed a career where he was eventually named manager of the tools department, until his retirement in January of this year.
He met Faye Bridges in McComb and they married June 25, 1959, and made their home in McComb and started a family. He enjoyed golfing, fishing, and gardening and yard work.
In addition to his parents, he is preceded in death by his sister, Nadine Brumfield Blackwell; and brothers, Rex A. Brumfield and Johnny E. Brumfield.
He is survived by his wife of 59 years, Faye Brumfield; daughters, Gwen Hansen (Robert), of Winona, TX; Lisa Cockrell (Tim), of Terry; and Angie Milton (Mark), of Covington; his son, George Byron Brumfield; sisters, Lucille Boyd and Alyne May (Lloyd); grandchildren: Benjamin Hansen (Marissa), Zachary Hansen, Caleb Cockrell, Matthew Cockrell (Hannah), Luke Milton, Byron Milton (Lauren), and Millie Milton; great grandchildren, Brantley Cockrell and Lily Hansen.
Services will be private.
In lieu of flowers, the family requests memorials be made to Paralyzed Veterans of America, P.O. Box 758593, Topeka, KS 66675 or visit www.pva.org/supportveterans or to Autism Society of America, 6110 Executive Boulevard, Suite 305 Rockville, Maryland 20852 or visit www.autism-society.org
Sebrell Funeral Home of Ridgeland was in charge of the arrangements.